#fatguymoves are all the craze nowadays. For those who have not adopted the lifestyle (yet), a fat guy move is something one does that is unnecessarily comfortable, filling, or lazy…and best of all, you don’t have to be fat to be a fat guy. My own #fatguymoves are often the highlight of my day and I always remember them fondly. Here is my list of top 13 fat guy moves:

Eddie Murphy 😉 knocks this out of the park. Sherman is a lovable character which is why I have him as an honorable mention. He is a fat guy, he wouldn’t hurt a fly and I don’t know anyone who had a dry eye when he has his heart to hear with his wife. Unfortunately the nature of this list necessitates that he be included.
R.I.P. Sherman:

13) This article on hercampus:

Another fat guy that the people love. He’s 42 and he’s still got it. After just 1 at bat his helmet will have more dirt on it than Craig Biggio’s. He is THE fat guy in sports. People might give him shit but he will just smile, give you a quick jiggle, and remind you he makes $10 mil a year playing baseball. The dream. 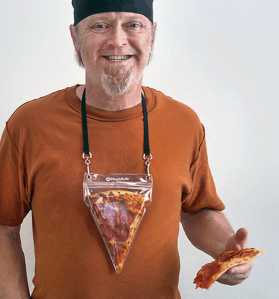 Eagles line too long? Didn’t wake up in time for breakfast? The pizza pouch has you covered. It is designed so that you will “never be without and emergency slice of pizza.
This is the fat guy version of the tourist with the passport around his neck. That’s bad. This is a certified #fatguymove.

Imagine all the times in your life you would have killed for a pair of these badboys. Leisure and comfort at a moment’s notice. It is definitely not to early to start making a Christmas list. 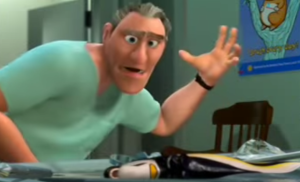 Just watch that video. Imagine the type person who first made these. Fat Guy. Although I must say it is genius. If any of you are lucky enough to be invited to my wedding, this will be the appetizer. (!)

7) Harry Potter On the Hogwart’s Express

Nothing to start off a friendship by taking all of the money out of your pocket to buy flavored beans and chocolate frogs. Here’s my face when I find a friend who knows how to live:

Just found this and thought I should include it

At least we knows where his allegiance lies.

5) White Goodman:
Never in the history of cinema has a single character fallen so far so fast. You lose a dodgeball tournament on ESPN the Ocho and your career is over. One does not come back from this:

4) Our dear president William Howard Taft (and his bathtub) 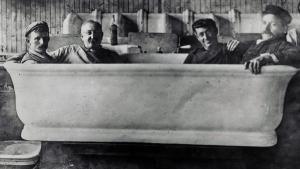 This is the president of America we need and deserve. A bathtub that four people can sit comfortably in? There are cars smaller than that.
This is a cartoon of a scenario that also likely happened:

what a fat guy! 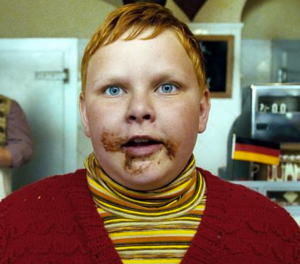 Not much to be said here. He doesn’t even make it 20 minutes inside the factory before Willy Wonka’s delicious chocolate river sucks him up. How to get diabetes at a young age 101.

For the record, I hate this version of Willy Wonka, but the helpless mother helping herself to a chocolate apple while her son manages to clog a tube wider than a tree trunk shows that the gene does run in the family. Especially if your last name is Gloop. That is a fat guy name

He’s a cat and he loves lasagna. Here Garfield can be seen on my Fat guydar: 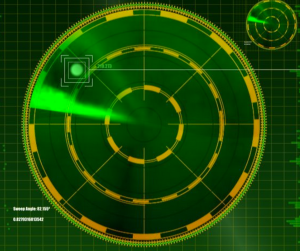 The average day for a fat guy doesn’t often top this. Nearly falling to your death, only to end up in a truck full of your favorite food? Lasagna and chocolate cake make excellent alternatives to a foam pit. Maybe a spicy steak by Maria? With all the extra steak you wouldn’t feel a thing.

1) Fat Bastard, with more Chins than a Chinese phonebook.
“He’s a disgruntled scottish guard known for his lethal temper and his unusual eating habits. He weighs a metric ton. His name: Fat Bastard” This is the ultimate fat guy. Not much competition here. I could make a top 50 list with clips just from Austin Powers.
Don’t let anyone ever hit you with the #fatbastardmove.